The first change you will notice is an update to the version numbering scheme. Traditionaly we would release regular minor updates (5.1, 5.2, 5.3 etc) followed by a major chargeable update (5.0, 6.0, etc) every three years or so. Starting now we are switching to a more regular release schedule rather than holding new features until a major update. The version number will be based on the date, so today’s release is 2017.1.1.

Coinciding with this we are dropping the upgrade products, Print Distributor now comes with lifetime upgrades included. Any license code issued for version 5 or later will work.

The user interface is completely new, we have removed most of the modal dialogs and replaced them with a tree view and property grid. The tree view on the left contains a virtual printer, its children are a list of actions to run. As you navigate around the tree the property grid on the right updates to show the properties of each object.

Just like in version 6, actions are run in turn starting from the top and working down. Some actions like the Decision will have their own child actions, in the case of the Decison the child actions are the actions to run if the test is true. This was the case internally for version 6 but now you can see it exposed in the user interface. 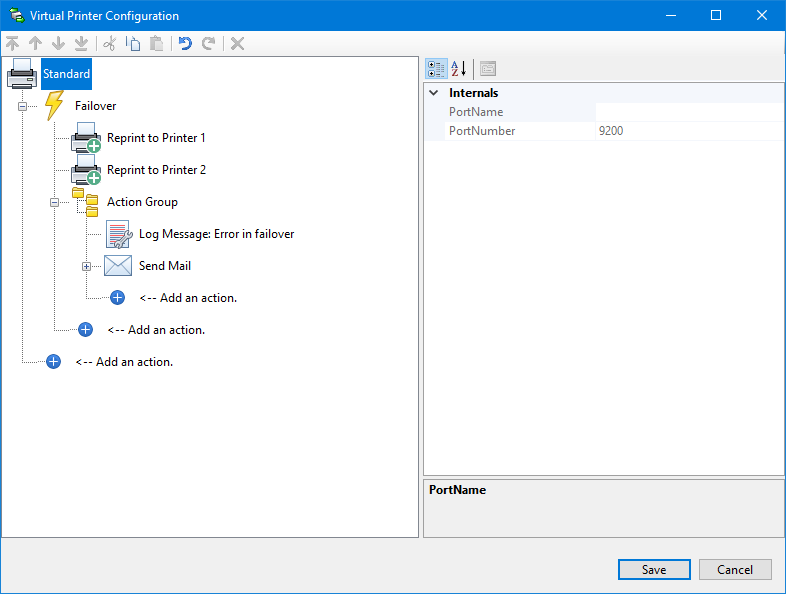 On Windows Server Print Distributor is installed as a Windows service the same as previous versions. However on Windows 7, 8 and 10 it is installed as a foreground application that shows an icon in the notify area. This allows easier access to network shares and printers installed on remote servers without changing the service account. It also opens up the opportunity for some kind of user interaction when a document is printed.

There is a menu item that allows you to switch back to a Windows service if that is what you need.

Small print jobs no longer get written to the file system which has boosted performance for typical customers substantially. Once the job size reaches a certain threshold it will be written to file as it’s possible for very large documents to exceed the available memory.

Virtual printers are now event driven rather than running on a thread per printer, this has lowered the resources needed to run many printers on a server.

Version 7 introduces a new queue type based on TCP/IP to replace the named pipe based queues of previous versions. This resolves compaitibility issues with Adobe Reader and Acrobat. The old style named pipe queues are still available and used if you upgrade.

The new Direct Reprint action sends a print directly to the printer over TCP/IP using either the LPR/LPD or AppDirect (port 9100) protocols bypassing the print spooler.

Common options allows you to set your SMTP settings in one place rather than in each Send Mail action as well as control threading and setting Before and After actions.

Send Mail is more flexible and easier to configure for attachments. Here you can see child objects that aren’t actions. 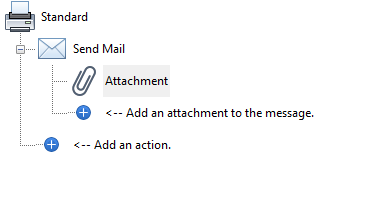 The template language has been enhanced with new filters and variables. Old template sequences are automatically updated when you upgrade or restore from a previous version.

Triggers for the Accumulate action are now child objects as are the actions, you can add as many triggers as you need. 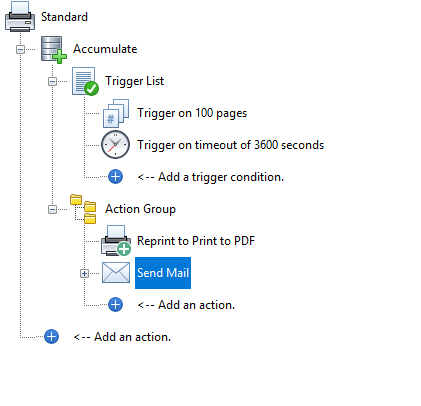 Windows printers support a many-many relationship with printer ports. Previous versions of Print Distributor could get confused if you modified this in Windows rather than Print Distributor. The new release resolves these problems and accepts whatever changes you make.

Print Distributor is now dependent on the .Net 4.6 runtime, if you don’t have it installed the setup program will prompt you to install it before continuing.